Jawdat Khoudary and his wife have a breathtaking collection of thousands of cactus species in Gaza. They collect them from all over the world. The stem is the main organ used to store water and may form up to 90% of the total mass of a cactus. Stem shapes vary considerably among cacti and shrink during periods of drought and then swell again as it fills with water during periods of availability. 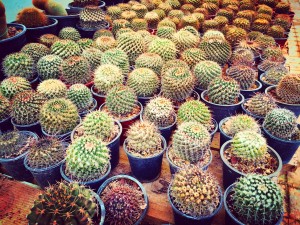 OXFORD Definition of cactus in English:
Cactus
Pronunciation: /ˈkaktəs/
NOUN (plural cacti /ˈkaktʌɪ/ or cactuses)
Phrases:
“In the cactus” , in difficulty or trouble:
– She has very kindly given me a small wad of bills and I am no longer in the cactus.
– Fine hold him for the police but throw him in the cactus you just got your boss a lawsuit.
Origin:
the word “cactus” derives, through Latin, from the ancient Greek κάκτος, kaktos. A succulent plant with a thick fleshy stem which typically bears spines, lacks leaves, and has brilliantly coloured flowers. Cacti are native to arid regions and are cultivated elsewhere, especially as pot plants.